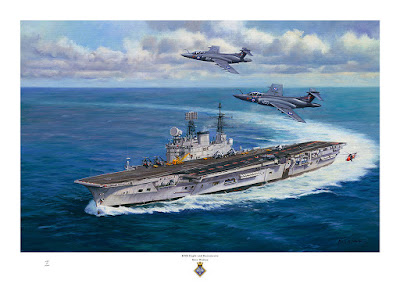 I've had another last minute change of plan, having looked at the lovely Flight Deck Decals that I have collected together for this project, and have decided to swap out the commando carrier HMS Albion for the aircraft carrier HMS Eagle. There are a number of reasons for this shift in direction, which I will try to explain without sounding too much like an idiot.

The Navwar N127 casting that I have for Albion / Bulwark doesn't match up exactly with the FDD deck decals, so I will need to do some plastic card surgery to modify the model beforehand. This would be quite a fiddle, so it's easier just to go for the carrier option. I think I may have been given the wrong casting, as it looks very much like the unmodernised N1214 HMS Albion model?

It also means that I get to paint up the 1/600th scale Tumbling Dice Sea Vixens, Buccaneers and Gannets, which should be fun and will open up a lot more options for scenarios. It's a bit more work but we'll worth it in the long run. I will now have a carrier task force rather than an amphibious one, but that's probably a better idea anyway!