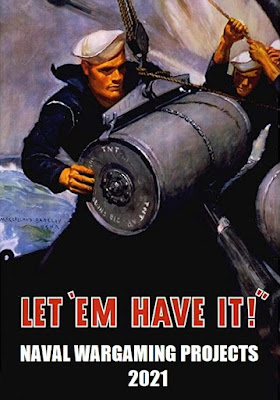 Happy New Year!
Here are the things I'm going to be working on this year in my 'Let 'Em Have It 2021' naval wargaming project campaign:
1. 1/300th Cruel Seas
This was in my list last year but didn't happen, primarily as it was aimed at multiplayer club games, but I've had a re-think and will now focus it on scenarios I can run at home, either solo or with the sprogs. The initial focus will be on the Kriegsmarine and the 5th S-Boote flotilla c1944 but I have plans to diversify, with some RN MTB's, MGB's and trawlers to follow.
2. 1/3000th WW2
This was also on my 2020 'to do' list but got sidelined by other things, so it's coming back in 2021 with a focus on the early war Kriegsmarine and Royal Navy, with a specific emphasis on destroyer and cruiser actions, rather than capital ships, at least to start with. I am thinking of using Find, Fix and Strike as the rules for this project, with Naval Thunder as a fall back.
3. 1/2400th Pre-dreadnoughts
I made good progress with this project last year, assembling, basing and undercoating French and Italian fleets from Tumbling Dice, so it would be a shame not to see them painted and in action this year. I'm also considering extending the project to the Sino-Japanese War, which is a really interesting conflict for the early pre-dreadnought period. The rules will be Tsushima or Broadside and Salvo.
4. 1/600th Steamer Wars
This was a project that popped up this year but only got to the planning stage, with the models ordered frim Tumbling Dice but then stashed for a rainy day. The plan is to paint up German, Belgian and British coastal forces for action on Lake Tanganyika, using Steamer Wars and the supplement for the rules. I will probably use my existing coastal terrain for this with a few specific additional features.
5. 1/3000th Cold War Naval
A new project for 2021, although it's something I've thought about doing before, with a focus on the Indonesian Confrontation as a 'What If?' conflict. I've already gathered together two naval forces for this, with the Royal Navy and Indonesian Navy of the mid 1960's well catered for, alongside the aircraft for both sides in 1/600th scale. I also have some sketchy plans for French and Soviet Cold War fleets.
6. 15mm WW2 / Modern
I can't just do naval things, so I'm also going to have at least one land based project in 15mm, having not painted a single figure or vehicle in this scale in 2020. I had a go at 28mm painting last year with the Beja army, which reminded me why 15mm is a much better scale for my painting purposes! I am now thinking of starting a 15mm WW2 late war platoon or company level project, or at the very least some 15mm modern wargaming perhaps based on Sandbox Skirmish revived, but I'm not making any definitive plans just yet.
No planes this year? No, I'm going to stick to naval projects but there will be some 1/600th scale aircraft required for a couple of these, so I will be able to get some aircraft painted at some point. Will anything else squeeze it's way onto the workbench? Almost certainly, with 1/3000th scale space fleets and 1/700th scale modern fast attack already in  the side lines, but I will try to stick much more to the straight and narrow in 2021!
Posted by Jim Jackaman at 06:18