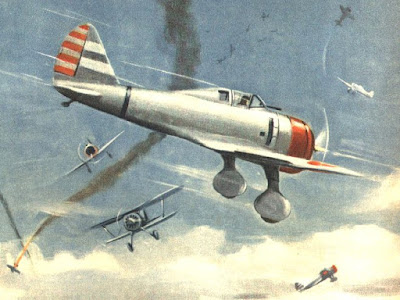 I've been busy at work this week, so painting has been postponed until the weekend, but I have continued to work on the next scenario for the Bag the Hun Khalkin Gol project. This is a pure fighter vs fighter dogfight on the 22nd May 1939 over the frontline but the Soviet and Japanese accounts conflict. The Japanese reported that a patrol of three Ki-27's of the 1st Chutai, 24th Sentai, encountered six I-16's and shot three of them down for no loss.

However, the Soviets claim that a patrol of three I-16's and two I-15bis of the 70th IAP, clashed with five Ki-27's, mistakenly identified as A5M Claude naval fighters, losing one I-16 flown by a pilot named Lysenkov. To make sense of this, I'm going to use the Japanese report as a basis for the total of Ki-27's and the Soviet report for the composition of the 70th IAP flight. I still have some work to do to hammer out the scenario set up, pilot experience ratings and card deck, but I think this mix and match approach will work well and result  a balanced game?