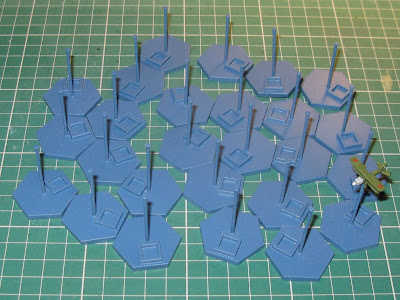 I did a recycling job a while ago on some flight stands, that I originally made for 1/600th scale modern aircraft using a wire upright permanently glued to the models. These were made for Bag the MiG but I'll now use them for the Khalkin Gol project instead. I switched over to magnet basing for my 1/600th scale planes, so I removed the wires, re-drilled the bases and inserted 40mm panel pins instead. The whole lot were then resprayed with Halfords grey primer and finally given a couple of coats of Halfords Rover Henley Blue. Anyway, I have twenty six of them ready for some playtesting of the Khalkin Gol scenarios when I finally get round to writing them, using my old blue hex cloth until I can afford a nice new Mongolian steppe themed one.