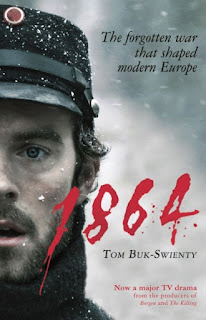 I've finally got round to reading this, having really enjoyed the TV series that came out a few months ago and having also had a very enjoyable trip to Denmark last year. The Second Schleswig War has been an interest for a while, mainly the naval side of the conflict, but I am vaguely pondering the a low level skirmish sort of thing in 28mm, now that the Northstar range has been expanded to include the Danes for 1864.

This wouldn't be anything big, perhaps a dozen figures a side, but could kill two birds with one stone as the wintery terrain could double up for the Siegfried Line or Ardennes in 1944. Just a thought, so in the meantime I'll just carry on with the book until I get carried away and order some more gratuitous lead for the pile.
Posted by Jim Jackaman at 23:54