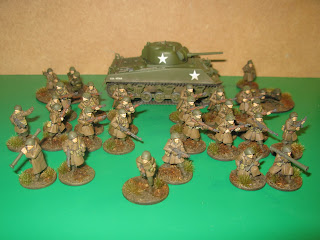 I have a game of Bolt Action set in the Ardennes on Tuesday with an upper limit of 700 points. This is a pretty tight threshold and I've been playing around with the numbers to try to put together a decent, reasonably balanced patrol sized unit, ready to defend or to attack as required by the as yet to be decided scenario. This was harder than I thought....
I wanted to include a tank, as I have plenty of them to choose from and little else in the way of anti-tank capability, so the Sherman M4A3 had to be included. I also wanted a mortar for long range support and an MMG team for supporting fire. At least one bazooka team was also on the shopping list, as I have unpleasant memories of the game before last in which the enemy armour was virtually unstoppable, so I added two just in case.
If you add this lot to the obligatory two regular infantry squads of ten* men plus the platoon commander you are really short of spare points, so I chose to add an NCO to the command team and upgrade both the 2nd Lt and the sergeant to veterans, making them a little more resilient. The total tops out at 699 points, so I've really scraped the barrel to put together what I hope will be fairly flexible, hard hitting but balanced patrol sized force.
(*yes, I know there should be twelve but I ran out of riflemen...so it's an understrength squad!)
Posted by Jim Jackaman at 12:57