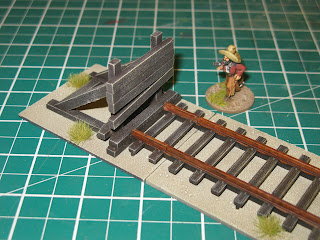 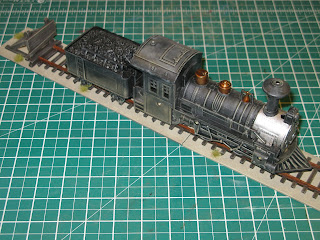 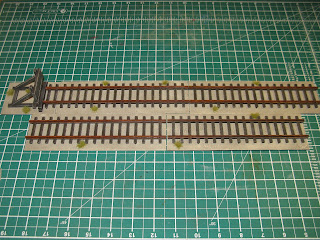 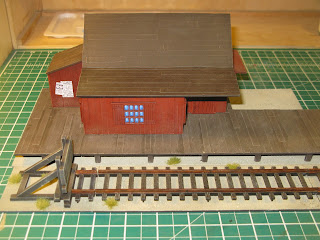 I decided to stuff the work this evening and instead got on with the railroad tracks for the Warfare game. I've only based up and painted another three sections as I realised that, to avoid gaps in the track between them, I'd need to make four long and four short sections in total. I've ordered some 7' laser cut bases from Tony at ERM to use for this, alongside the four 7 1/2'' sections that I already have based up.
I also made a scratch built buffer stop from a section of curved rail cut down to size and some strip wood, which seemed like a good idea if the overall track length isn't long enough to span the table from edge to edge. I may also make a blown up section of track using the same method, as it may be useful for scenarios. The Goldlok toy train gauge is a bit too wide for the track but you don't really notice unless you look closely. I have another carriage and a flat wagon to paint up as well.
I also have the bogies and locomotives from the original toy train sets that the track came from, so I may well use them as the basis of an armoured train for the Back of Beyond at some point in the future. I've built one of these before and quite fancy making another one, complete with a rail gun for a Chinese Warlord or Bolshevik Commissar to terrorize the locals with. I'm sure it would be a great addition to my Back of Beyond arsenal?
Posted by Jim Jackaman at 15:18

Labels: Back of Beyond, Fistful of Lead, Old West