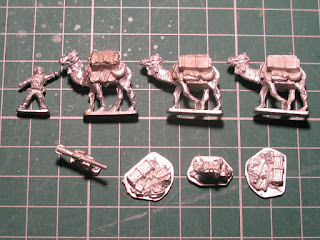 I had an idea today. I was thinking of some extras to add to the rebel platoon for my Sandbox Skirmish project but didn't want to use any vehicles, as it's a remote desert location with little infrastructure and a rebellion based on guerrilla warfare.

Instead, I had a rummage in my colonial box and found some pack camels, which are perfect as a supply train for my insurgents. I have four of these now, as I found an extra one in a different box, each loaded down with a different range of ammo boxes, baggage and generic 'military' looking objects.

I also scrabbled around in the AK47 box and found a radio and a couple of arms caches, together with a spare light RCL that I can swap out for the mortar as fire support. It's not exactly a massive arsenal but I think this little lot will make an unusual and useful addition, especially for Search and Destroy type scenarios.
Posted by Jim Jackaman at 20:15