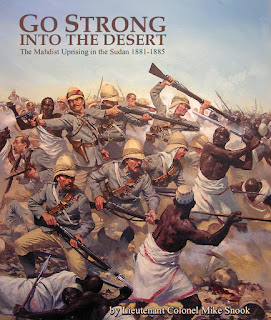 I've been re-reading the excellent Go Strong Into The Desert as some background research for a potential project next year, using 15mm Peter Pig figures and The Men Who Would Be Kings skirmish rules. I have all the figures in the lead pile and now also have my desert terrain board, so I just need to get the lead painted and I'm ready to go.


The idea would be to do the Beja first then do either a naval landing party or a unit of infantry, probably Royal Marine Light Infantry or the 2nd Battalion Duke of Cornwalls Light Infantry, the former for the Suakin Field Force and the latter for the river column in the Gordon Relief Expedition. After that I could branch out and do other add on units and extras like heliograph teams, engineers or mounted infantry.


It's all just an idea at the moment but could be good fun and would tie in nicely with my current post colonial Sandbox Skirmish project. I like the fact that the tribal contingent would be quick to paint, having painted some very similar figures for AK47, while a British 24 point force would only require about forty figures or so to be painted up. As I'm a slow painter and not particularly good at it, this would be a real bonus.
Posted by Jim Jackaman at 15:22

Labels: The Men Who Would Be Kings