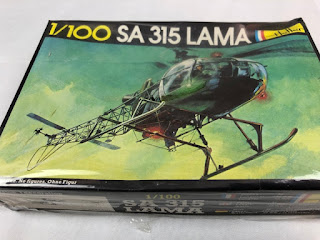 I've won a second Heller 1/100 scale Alouette II kit on eBay, so now don't need to make the only one I had and can save it for my AK47 Colonial Settlers army. Ideally, I'd get a Westland Scout or Bell  Sioux for the Sandbox Skirmish project but no one makes them in 15mm. There isn't even a Westland Wessex and/or Sikorsky Choctaw available, which is bonkers as they were used on all sorts of conflicts from Vietnam to the Falklands! Anyway, I will have a helicopter as a spotter and for casualty evacuation when things go pear shaped up in the back of beyond. I've also seen a lovely little 15mm model of an Auster from Old Glory UK which is very tempting but a little bit extravagant.
Posted by Jim Jackaman at 07:58