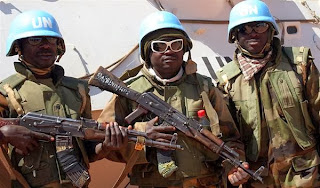 I'm snowed under with work again, so the AK47 army has had to take a back seat for a couple of days. However, I have decided to run a mulitiplayer AK47 mini-campaign at the club next year, starting sometime in mid to late February.
I have four other players signed up, two as Colonial Settlers, one a Dictatorship and one nationalist Peoples Popular Front, along with my Superpower Backed army to make up the numbers. I'm hoping that one more player will join in to make six in total, as this makes it much easier to match up head to head games.
To make this work, I'm lending my Dictatorship army to one of the team and will try to complete another small force for someone else to use, once I've finished the current Superpower Backed stuff. This is on target for the end of December, if all goes according to plan?
The front runner for a third army is a UN Intervention Force, using the add on rules and political flowcharts from the RFCM group, with either my stockpile of French Foreign Legion or Israeli / South African figures and AFV's as the three unit professional core.
Should be a lot of fun!