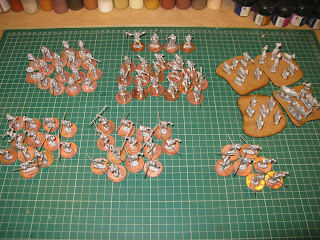 I've un-boxed the figures for the In the Heart of Africa tribal villager army this evening and have had a bit of re-think about the make up of the force. I was originally going to go for units of sixteen for the spearmen, musketeers and archers but instead have decided to scale down to twelve as the smallest unit size.

This means that I have two musketeers, four extra spearmen, eight extra archers but only twelve bodyguard spearmen to clean up and base to complete the army for painting, along with half a dozen casualty figures as morale markers. I have the extra archers on order but the rest are ready for basing up and undercoating.

The basic army without any stratagems or extra bits, will now look like this:

This is pretty small as a force, at least in terms of points if not figures, so I'll be adding 140 points of pitfall traps for ambush scenarios or 140 points (24'') of field fortifications, in the form of a 'boma' for the villager to defend. This will bring the total points up to around 500, which is probably about right for a decent game. I can also add some extra musketeers of a unit of spearmen at a later date if required.