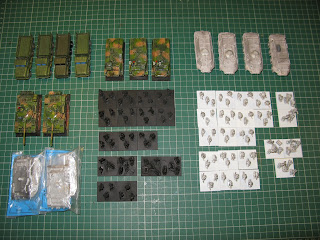 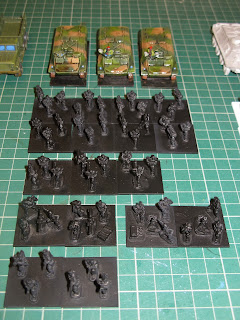 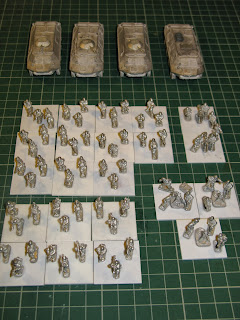 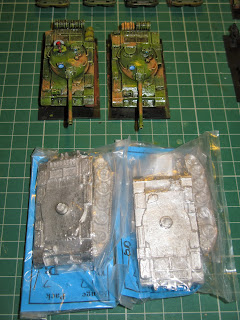 I've decided to crack on with the AK47 Superpower Backed army for completion by the end of term. The Local Education Authority, in it's air conditioned, water cooler hydrated, shag piled wisdom has decided that this will be on the 21st of December. So, with no further ado (is ado a word or does it need a hyphen?), here's the bulk of the army laid out for inspection.

As you can see, there's a single professional beret clad infantry unit complete with half painted MTLB APC's, alongside a unit of regular T55 tanks, half of which are still wrapped in plastic. These are needed as potential additions to the army in the political phase of the game. To the right there's a unit or two of regular small arms, RPG bases and heavy weapons, with either BTR60's or trucks for transportation.

I need to sort out a couple of militia units for the army but I have plenty of figures for this and some rather neat Toyota pick-ups that will do the job very well. I'll try to limit the number of militia infantry bases that I need to paint up, as at only seven points each they're a little bit of a pain when you need ten bases as minimum. I'm sure I can cut down the workload with a bit of imagination and some judicious bits and bobs from The Scene.

I'll also be adding a 1/100 scale plastic kit of an Mil Mi24 Hind gunship and a ground attack aircraft of some description, just in case I get lucky on the double dice rolls!
Posted by Jim Jackaman at 12:27