I'm now piled high with yet more marking but I have had some ideas for a UN Intervention Force for AK47, which might even see the light of day. The rules and flowchart for UN peacekeepers are posted by a player on the RFCM yahoo group as an add-on for the old rules and I think they look pretty good. 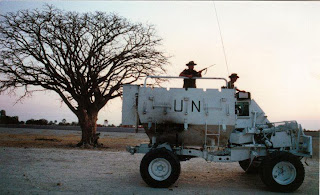 To start with, you get an initial unit of professional observers, with no heavy weapons or armoured vehicles. I've decided to keep mine down to the bare mimimum of four S/A bases, so that I can save the points for the two other professional units in the force. This seems like a bit of a gamble but it should pay off. The figures will be from the Peter Pig Israeli range 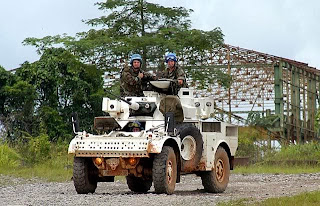 The second professional unit will consist of six S/A groups plus two ATGW missiles, rules for which are included in the army list, with four machine gun armed Rhino anti-mine APC's to move around in. This lot is quite expensive in points but should be very useful in a stand off battle. The third unit will either be a diecast Mangusta attack helicopter or two 90mm armed Panhard armoured cars. 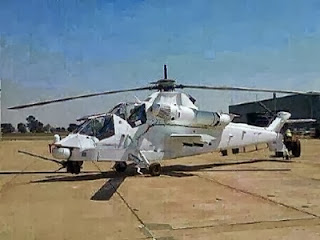 The fourth unit has to be regular one, so I'm going to dig out some of the leftover Peter Pig hardened militia figures from the spares box and paint them up as UN sponsored security forces. I will probably just have four S/A bases and a couple of RPG's, with a couple of Unimogs to truck them around in, but I might also make some HMG mounts for the Unimogs and use them as fire support. 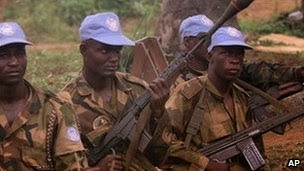 The fifth and final unit is going to be a militia unit using the 'new' Peter Pig militia figures that I didn't use for the Mbote dictatorship. This will represent a local militia force or unit of guides for the UN mission, although it will only consist of six S/A bases and a mix of RPG's and heavy weapons, rather than any vehicles. 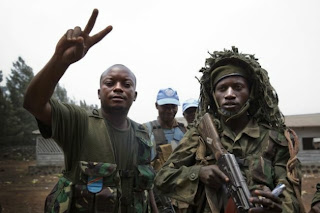 I have 99% of the stuff I need for this, with the ATGW teams being the only thing that I'll have to find from somewhere. I also have some diecast air support lined up, in the form of an AML jet fighter bomber and an Augusta EH101 transport helicopter for airlifting the professional troops in and out, should the need arise.

If I get the Superpower Backed army shifted I can start on this one straight after Xmas!
Posted by Jim Jackaman at 07:50