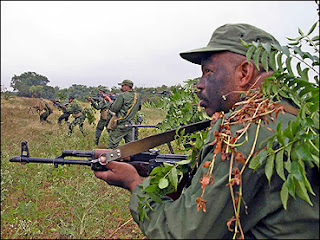 
In response to the aggressive and unprovoked deployment of Bana Soto military forces, the Mbote Minister for War, Major Fubar Snafu, has announced the immediate mobilisation of all units of the Mbote Defence Force. With immediate effect, all leave has been cancelled and all military personnnel have been ordered to report for duty.

A state of emergency has been declared and the MDF has been placed on the highest level of readiness, with immediate deployment in effect should the Bana Soto government initiate further hostile threats to Mbote border security.

In a press statement, Colonel Banga 'Boum, the very popular and undisputed President of Mbote, declared his support for a Combined Regional African Peacekeeping mission to the disputed border zone, in order to avoid unnecessary regional conflict:

''Only a totally C.R.A.P. intervention can prevent the naked aggression of the Bana Soto post-colonial puppets''
Posted by Jim Jackaman at 11:14