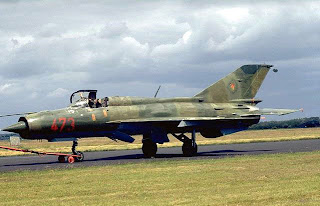 From our defence correspondent in Zambuzi

In a press conference today at Mbote Air Defence Force High Command in Zambuzi, the Minister for Military Aviation, Colonel Ijek Taseet, announced the procurement of five MiG21 Fishbed fighter aircraft. These former Albanian aircraft will replace the ageing fleet of MiG17 Fresco fighters currently in service with the MADF.

The component airframes have recently arrived at Port Tchumba and have been transferred to the MADF maintenence facility at Mafuso, where they will be re-assembled by air force technicians for initial flight testing and pre-operational familiariation exercises. 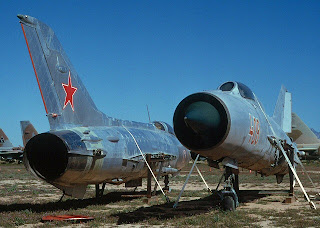 However, Colonel Taseet acknowledged that these 'tip top' fighter aircraft are unlikely to be operational in the near future, as the re-assembly programme requires specialist tooling that has yet to be located. It would also appear that technical manuals have been provided but these vital documents have only been supplied in Albanian.

In his daily radio broadcast, President Mpongo stated that the procurement of these 'bunga bunga' fighter aircraft may well shift the balance of power in the region and could de-stablise the existing peaceful relations between  the Peoples Democratic Republic of Mbote and it's immediate neighbours.

However, he emphasised that this upgrading of MADF capability was purely for defensive purposes.