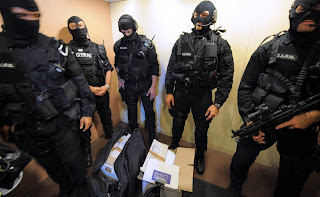 From our diplomatic correspondent in Port Mtumtu

In an early morning raid on on a Mbote registered merchant vessel in Port Mtumtu, a specialist firearms unit of the Police Nationale d'Nbuto siezed and detained a Swedish national. The man was subsequently identified by Interpol as the fugitive international arms dealer, Mr Gunnar Vorsayl.

In a subsequent press briefing, a spokesman for the Police Nationale d'Nbuto, confirmed that a number of military grade documents and technical manuals were discovered in the possesion of Mr Vorsayl, who has been detained by the internal security service on suspicion of espionage and arms smuggling. 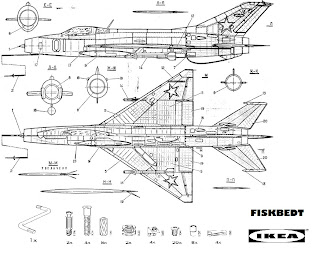 In addition, a shipment of Teach Yourself Albanian tapes were recovered from the luggage of Mr Vorsayl, along with several copies of a Mbotean-Albanian dictionary, stamped Property of Tirana Socialist Peoples' Library. It would appear that these are several weeks overdue.

In a press statement, the President of Nbuto, Jean Pierre Croissant, demanded an explanation from both the Swedish Consulate and the Ambassador of Mbote, stating that any  infringement of the fragile peace accord between Mbote and Nbuto could result in the collapse of the current ceasefire.

The Mbote government has denied all knowledge of the activities of the alleged arms smuggling incident and has, in turn, demanded the release of Mr Vorsayl, who has been granted dual Swedish-Mbotean nationality by special decree of the President, Papi Mpongo.