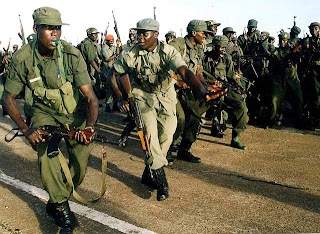 Reports are coming in of a major defeat for the Nbuto Force Action Rapide Territoriale at the hands of the Mbote Defence Force.
The details have yet to be confirmed but, according to the Mbote Minister For War, Colonel Banga B'oum, the MDF has dealt a severe blow to the FART in a short but bloody battle on the outskirts of Kabunga..

The MDF has now conducted a phased withdrawal and has been lifted from the beachhead by landing craft. The remnants of the FART taskforce have retreated in disorder toward Kabunga, leaving a trail of wrecked armour and vehicles on the battlefield.

In his daily radio broadcast, President Mpongo, ordered a day of spontaneous 'bunga bunga' celebrations and a full military parade through the streets of Port Tchumba, to welcome the returning units of the MDF.

...in other words, the FART got thrashed! I'll post some photos later.