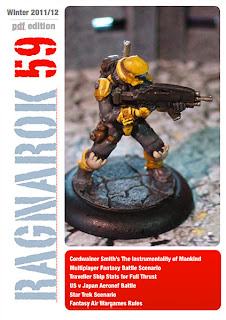 A few weeks ago I decided to sign up to a couple of long established old school wargaming societies, the Naval Wargames Society and the Society of Science Fiction and Fantasy Wargamers.

The idea was both to support independent wargaming and to give me some inspiration for projects next year, which I've decided will focus on 'things' rather than figures in an attempt to get some stuff shifted that I've always wanted to do. Anyway, the SFSFW magazine, Ragnarok, popped through the door today and, after a quick flick through, I'm really very impressed.

The production values are top notch and the content varied enough to interest anyone with only a passing interest in Sci Fi and Fantasy gaming, which describes me pretty well. It's already got me thinking about dusting off the Aeronef fleets for a game or two. I'm also thinking of moving the Full Thrust and Iron Cow projects one step closer to the top of the 'hit list' for 2013.

In the editorial, Steve Blease, has sent out an appeal for articles for future issues, which reminded me of the Aeronef multiplayer Scramble for Africa campaign system that I devised and ran at the club a few years ago. I'll have to dig out the files and have a look. If they're any good I'll shoot them off to Steve to see what he could do with them, if anything?

What do you think Steve?