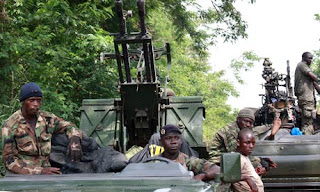 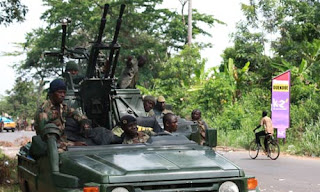 From our military correspondent in Mtwange

In a pre-dawn amphibious landing this morning, a strike force of the MDF established a beachhead on the coastal strip of Nbuto, thirty kilometers south of Port Mtumtu. There was mininal resistance from local units of the FART, which have withdrawn inland ahead of the advancing MDF strike force.

A spearhead of MDF vehicles and troops is now heading in the direction of the mining town of Kabunga. The objective of the Mbote forces seems to be a punitive raid in retaliation for the sinking of a MCDF patrol vessel and the seizure of sensitive military documents by the government of Nbuto.

A counter strike by units of the Force Action Rapide Territoriale is expected.
Posted by Jim Jackaman at 02:08