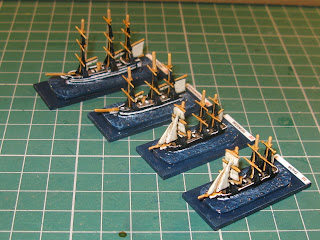 I've done a bit of a blitz to finish off the Danish ships for the Battle of Jasmund, minus the Sjaelland but including the Tordenskjold, with only the rigging and flags left to do. I struggled a bit with the strakes on the Skjold and Tordenskjold but they're okay. I also didn't get the exact shade I wanted on the masts and spars but it's not too bad. It's all good practice for the Napoleonic project anyway!

I'll get started on the Prussians to tomorrow including all of the 1st and 2nd class gunboats for the entire fleet, as I might well paint them all in one go. I still need a proxy for the Prussian Royal Yacht Grille but I think I'll just have to manage without, which makes it difficult to replay some of the later skirmishes. I'm also thinking of playing a game of Broadside and Ram tomorrow with the US monitors, as I haven't actually tried them out yet!
Posted by Jim Jackaman at 11:22