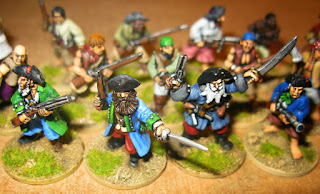 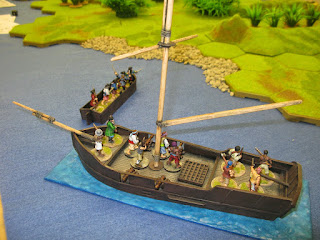 As I'm enjoying the games of Fistful of Lead I've been running for my kids, I thought I'd have a go at setting up a pirate scenario or two, using the Horse and Musket version of the rules. The kids are pretty clued up now, so I won't have to explain the rules beyond a few minor changes, so it's an easy crossover, especially as I have some painted 28mm pirates that I haven't used for years. I haven't got as much terrain for a desert island setting but I have enough to get by, including a scratch built pirate sloop and some nice jungle ruins from the local pet shop. I just need to roll up a couple of scurvy pirate crews and work out a scenario, which I can probably adapt from the rulebook or pinch from the old Legends of the High Seas rules. Aaargh Matey!
Posted by Jim Jackaman at 17:34