The Battle of Sable Island 1871 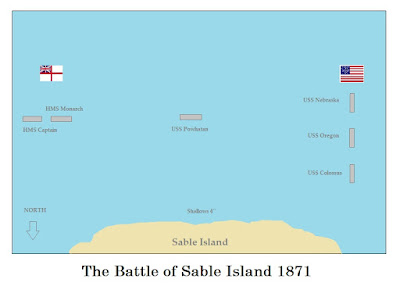 This is the second of my 'What If?' scenarios for Broadside and Ram, following the Battle of Halifax Opening Shots game I played a few days ago.

In this scenario, the Royal Navy has dispatched it's most modern and speedy ironclad warships to relieve the blockade of Halifax by the United States North Atlantic Squadron. The US commander, Rear Admiral Lee, has decided to impose a distant blockade of the port, following the hammering of his monitors by the defences a few days ago. This blockade is hinged on Sable Island, two hundred miles out in the North Atlantic, where he has established a coaling station and anchorage for his ocean going monitor fleet. 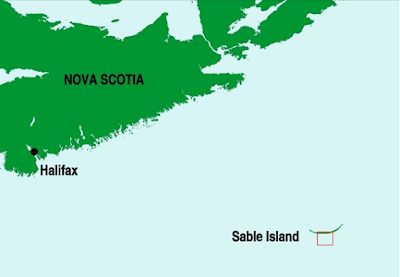 The Royal Navy has gained secret intelligence information revealing this plan of action, so has already dispatched two powerful warships ahead of the main relieving force, to bombard and destroy the coaling station and any of the US warships anchored there. The two ironclads, HMS Captain and HMS Monarch, are under the command of Captain Burgoyne VC. From scouting reports, he has discovered that there are a number of US monitors and a paddle frigate currently anchored off the southern side of the island. 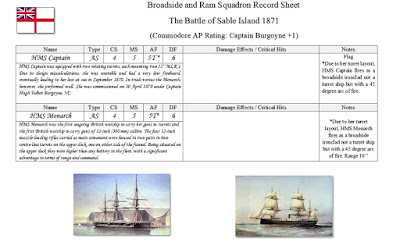 At the start of the game, the US monitors are at anchor due the strong onshore current. This will cause any ship that is shattered or otherwise out of control to drift towards the shallows that surround the island at their cruise speed (CS). The US monitors must weigh anchor to move but do have steam up, so may move as soon as they are unanchored. The USS Powhatan is the picket ship and is not anchored at the start of the game. She has been ordered to act as an independent, in order to determine the identity of the two ships approaching from the west, whose masts have only just been sighted due to the dawn mist and low position of the sun. 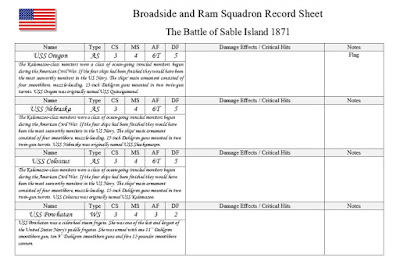 The US flag officer, Commander Howell, does not expect any Royal Navy warships to be approaching as any British relief force is expected to arrive in a few days time, having to cross the Atlantic from Great Britain or Gibraltar or steam north from the Caribbean. However, due to top secret intelligence provided by British Secret Service spies and informants inside the US government, the Admiralty had prior warning of the attack on Halifax, so took the precaution of dispatching HMS Monarch and HMS Captain in advance. The British therefore have the Initiative.