Opening Shots - The Battle of Halifax 1871 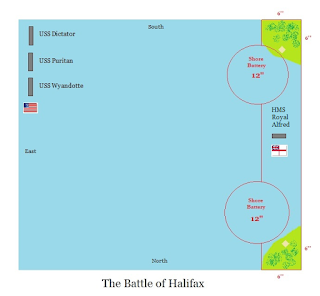 This is the first Broadside and Ram scenario that I'll be playing in a series of three, based on my 'What If?' war between the British Empire and United States of America in 1871. In this scenario, the US North Atlantic Squadron has arrived off the port of Halifax, Nova Scotia, to begin a blockade designed to pressure the British into ceding part of Canada to the USA under threat of a shooting war. The US vanguard consists of three powerful ironclad monitors - the USS Dictator, USS Puritan and USS Wyandotte - with orders to initiate the blockade, while the remainder of the fleet steams north from Boston.

The only British warship that can match these ironclad monitors is the flagship of the North American Station, HMS Royal Alfred, an 18 gun central battery ironclad. HMS Royal Alfred is ordered by Vice Admiral Wellesley to steam out of Halifax, challenge the monitors and force them to withdraw, despite being outnumbered and outgunned by the US warships.

If push comes to shove, the only option for her commander, Captain Wells, is to go down fighting, with no hope of reinforcements arriving in time but with the chance to seriously damage the US monitors and thus weaken the blockade before it can take hold. The US squadron, under command of Rear Admiral Lee in USS Dictator, has orders to open fire on any warship that attempts to escape before the blockade is in place.

In the game, I'll use HMS Royal Oak as a stand-in for HMS Royal Alfred but the US monitors will all be the actual ships involved. The monitors seriously out-gun the conventional ironclad but HMS Royal Alfred will be an independent command, with an advantage in terms of tactical manoeuvring over the US squadron. Captain Wells will also have a  +1 command rating, which should help a bit, as well as the support of the shore batteries if the monitors get too close inshore.

I'm hoping to play this game in the next couple of days.
Posted by Jim Jackaman at 08:59