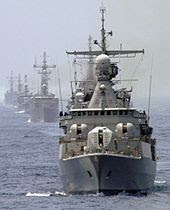 A couple of weeks ago I ordered a selection of 1/3000th scale modern Argentinian warships from Navwar, to use as alternative opposition for my Chilean forces. I put them away and forgot about them but found them this morning. I'm using a time frame of the early 2000's for the project, which means that the Argentinian Navy still retains some effective capability, in surface if not submarine warfare, even though its a relatively small naval power. There are four Almirante Brown destroyers, six Espora class frigates and three Drummond class corvettes, as well as a couple of subs and a few FAC's. At least they won't take long to paint!
Posted by Jim Jackaman at 02:37