Football War not so Civil Aircraft

Here's the last of the aircraft for the Wings at War Corsairs and Cavaliers project, with four Douglas C-47's and three Cessna U-17 light aircraft, once again using the Tumbling Dice Stinson Sentinel model as a stand in. The C-47's will be split evenly between the Honduran and Salvadoran air forces as make shift bombers, with the bombs rolled out through the side cargo doors. They actually did this and had some success, although I suspect it was very little hit and mostly miss! 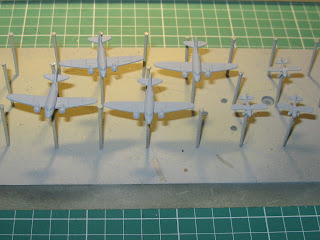 The Cessna flight can be used for either side, as nuisance raiders and very light bombers, using mortar rounds strapped to the passenger seat, then thrown out by hand over the target. This will complete the project but I'm going to run a few play testing solo games beforehand anyway, using the fighters and fighter bombers I've already finished. I've also had another look at the core rules and have edited them a bit more in line with Chris Russell's feedback, which should make them easier to navigate due to far less 'alphabet soup'.