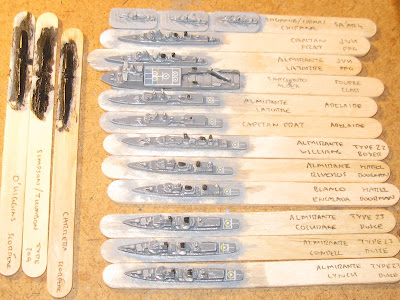 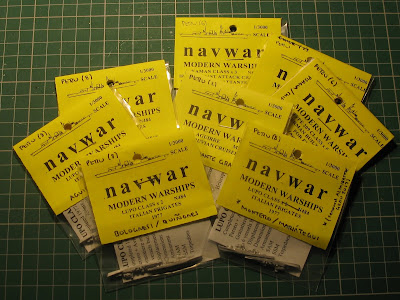 I have almost finished painting the modern warships for the Chilean Navy, having changed my painting method from a block in, wash and detail approach to a block in, detail, pin wash and highlight system, which I think has worked much better. You can't really tell from the photos due to the shiny reflection of the light, but they are a lot neater than my Indonesian Confrontation ships.

I have now gloss varnished the ships and added the excellent decals from Flight Deck Decals, using French ones as they are similar enough to the Chilean markings to be useable. I now have to seal them all with an overall coat of Army Painter anti-shine matt varnish, before I can start on the basing. In between this, I'm going to clean up and prepare the Peruvian Navy warships, so that I can start painting them sooner rather than later.