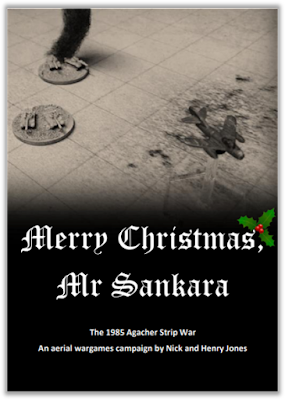 The excellent campaign system for the Agacher Strip War by Nick Jones is now available on Wargame Vault for the exorbitant sum of $4....bit of a bargain if you ask me!

It's a very clever and well thought out system for use with the Thud Ridge mechanics but it can easily be adapted to other rules. The production values are also top notch. I think it's great but why not find out for yourself? To help you dust off your wallets, here's the blurb:

On Christmas Day, 1985, Mali invaded Burkina Faso over a dispute in the contested Agacher Strip. In what became known as the Agacher Strip War, two of the poorest nations on earth fought over a strip of the southern Sahara. Air operations featured prominently, but there were no air-to-air combats. By the time of the Agacher Strip War, Burkina Faso had just one MiG-17, but until a few months before the Force Aérienne de Burkina Faso (FABF) had a force of eight Libyan supplied and manned MiG-21s. Merry Christmas, Mr Sankara imagines if these had still be available during the conflict.

Merry Christmas, Mr Sankara has a background of the war and the forces involved, a full campaign system, maps and a painting guide. Players have to balance offensive and defensive operations, keep an eye on public and world opinion and avoid attrition that they can ill afford.

In a short war players will use Soviet Cold War era jets – MiG-17s and MiG-21s – for air strikes, ground attack, escort and fighter missions and Mi-4 helicopters to transport troops. In the vastness of the Sahara players will need to form a strategy to seize key road junctions. For the Burkinabe player it will be a tough proposition; the Malian forces are more numerous but the Libyan pilots are more experienced.

The campaign should provide between 5 and 8 tactical games. Though designed with Wings at War: Thud Ridge in mind, it can be used with your favourite jet-age rules.