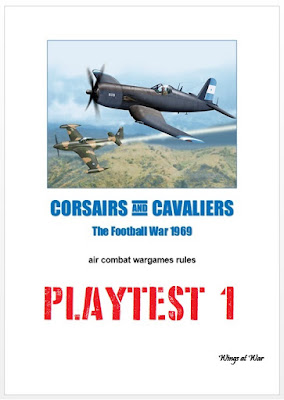 I'm off work today so set up a quick playtest game of Corsairs and Cavaliers, using my old and very wrinkled GW grass mat on the confines of the kitchen table. To make things interesting the FAS had a section of two Mustang Cavaliers at Altitude 4 / Energy 5 for top cover, plus a flight of three Corsair FG1-D's at Altitude 3 / Energy 4, the latter loaded with bombs for ground attack and with Green pilots. The FAH had a flight of three F4U-N cannon armed Corsairs with Green pilots, again loaded with bombs for ground attack. 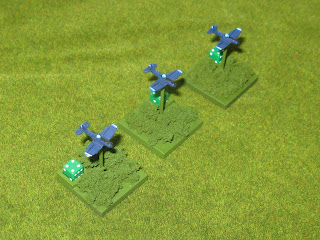 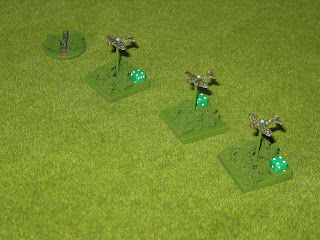 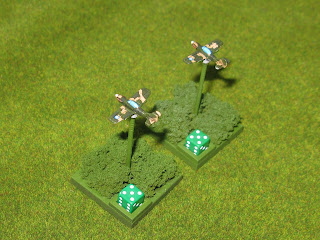 The targets were rolled for and the FAS placed three on the Honduran side of the table, while the FAH placed two in the Salvadoran side, spaced out according to the rules.

The Salvadorans decided to enter the Mustangs opposite the Honduran Corsairs on the left hand side of the table, while the Salvadoran Corsairs lined up on the closest target over to the right. As the Salvadorans always move first in the rules, it looked like they would have the upper hand throughout the game, with two more aircraft and some better pilots. However, the Victory Point system in Wings of War helps to balance this out, with the FAS needing 4 VP's to the FAH target of only 2 VP's. 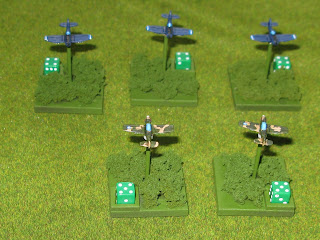 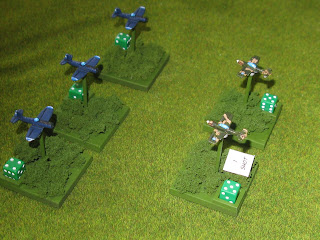 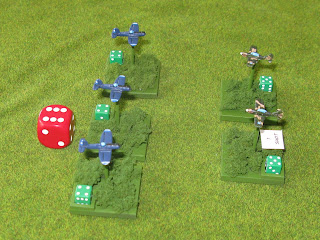 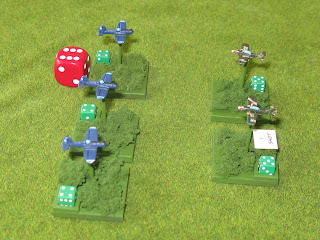 The initial turn of the game brought both sides aircraft on to the table. In Turn Two, the FAS Mustangs cut their speed, dived and moved forward to intercept the FAH Corsairs in a head on attack at Level 3. The Mustang pilots rolled a 1 and a 3, resulting in Low Ammo and a Miss, so it was now the turn of the Corsairs to fire back using the Snap Shot rule. The two Honduran pilots both rolled a 6, which meant that the Mustangs were both shot down in flames, handing the FAH an immediate and decisive win with 6 VP's, three times more than their VP target! 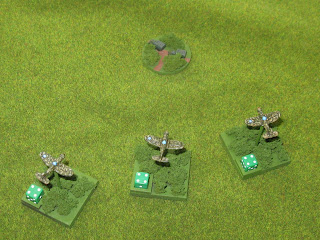 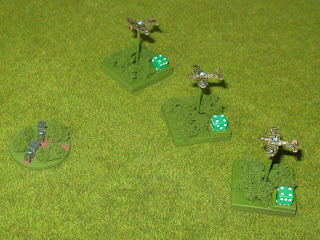 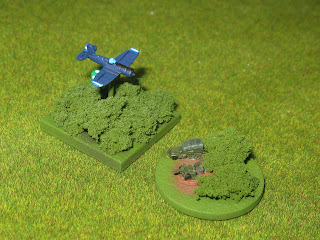 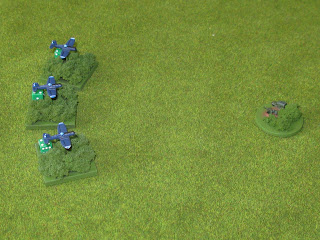 I decided to play on and allowed the FAH and FAS Corsairs to begin their respective bombing runs. In Turn Three the FAS Corsairs dived down to Level 2 and proceeded to bomb their target, a truck convoy on the Honduran side of the border. This involved a dive to Level 2, moving forward to bomb, then a zoom climb out back up to Level 3. The first Corsair swooped down and released its bombs, hitting the target with a roll of 4. The second and third Corsairs were committed to the bomb run, so they followed on but both were shot down by AAA, each rolling a 1 on the D6!

I finished the FAH bomb run to wrap up the game, with the three Corsairs performing a scissors manoeuvre to confuse the enemy AAA. This worked for two of them, with two direct hits on the target, but wasn't so successful for the first Corsair pilot who was unlucky enough to be shot down, again as a result of the dreaded 1 on his D6. This was the end of the game, as the FAH had already won and the FAS had been reduced to a single Corsair, whose pilot decided that enough was enough and flew off the table.

The Victory Points for the FAH when added up came to a grand total of 14, with two enemy Mustangs and two Corsairs shot down, together with two hits on one of the targets, so only seven times more than they actually needed to win! The FAS didn't go home empty handed, however, scoring 4 VP's, three for the Corsair being shot down and one for the bomb hit on the trucks, achieving their Victory Target but at far too steep a cost and far too late to make a difference. It was a fun game but luck played a big role for both sides, so a rematch with some different aircraft and some new dice (!) is definitely on the cards.