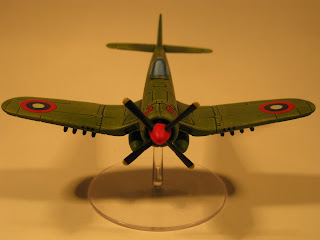 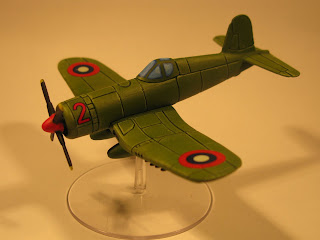 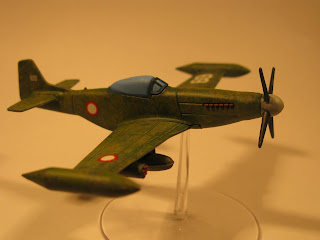 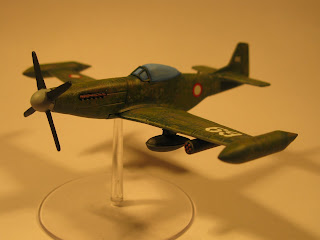 It's perhaps the best bit of a game of AK47.

You roll a double four and in zooms the air strike in support of your hard pressed professionals, as they valiantly fight off hordes of tooled up enemy militia. But..it tends to lack a certain 'something' or as my wife would say, a little je ne sais quoi (she's French by the way), if there isn't an actual aircraft to be plonked on the table.

Fear not, a little searching on Ebay, a bit of spray paint and some spare decals later and you'll have all that you need for a bit of ground strafing, however brief it may be in game terms. These are two of the converted diecast planes that I've made for AK47, a Del Prado/Italeri F4U Corsair and a GE Fabbri P51 Mustang.

I've turned the P51 into an ersatz Mustang Cavalier by adding some tip tanks from a diecast Thunderjet, extending the nose with green stuff and adding some rocket pods from a diecast Augusta helicopter. A bit of a classic COIN aircraft, so perfect for AK47, especially as diecast P51's are really cheap.

The Corsair is straight from the box but with the very spindly three blade prop exchanged for a spare four blade P51 prop with spinner, to make it a little bit like a Cuban Hawker Sea Fury. I quite like this one, so it's destined for my next AK47 dictatorship army (at least until the MiG 17 turns up).
Posted by Jim Jackaman at 20:52