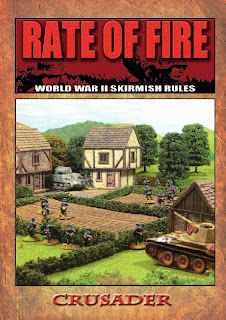 These look like an interesting set of skirmish level rules for WW2, perhaps as a potential alternative to Disposable Heroes, which is the other commercial ruleset I've considered for this level of gaming.

Although they don't seem to include rules for tanks, from the blurb on the webpage at least, they do cover most of the things I'd expect to see in a WW2 tactical squad level set and some extra bits that sometimes get left out.

The sample pages look good too, with clearly laid out content and some high quality graphics which, while not affecting the gameplay at all, certainly go some way to justify the price tag...why have rules all become so bloody expensive?. At £18 plus postage they don't represent fantastic value for money but I may well get a copy for 'research purposes' anyway, possibly the download version which is only £6 (bargain!).

I've already got some Artizan late war US troops in greatcoats that I could paint up for WW2 skirmish level games, so the N.Y.R. rule won't be infringed by a 'new' project.

On the other hand, I might be able to justify one of the Crusader box sets of British late war infantry, especially if they do some sort of deal over at North Star. They seem like good value for money and I really like the Crusader style of sculpting, having already got some of their Normans for WAB Shieldwall.
Posted by Jim Jackaman at 06:50