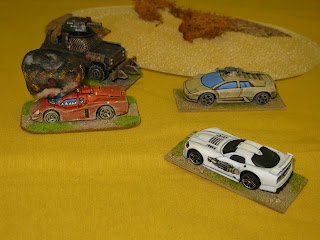 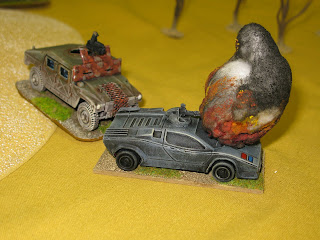 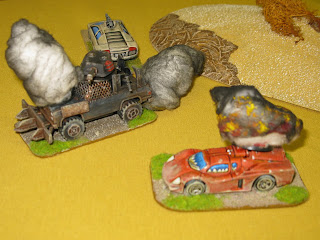 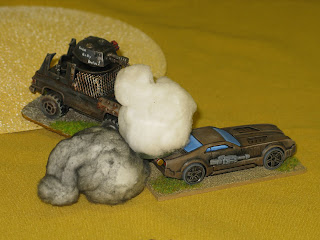 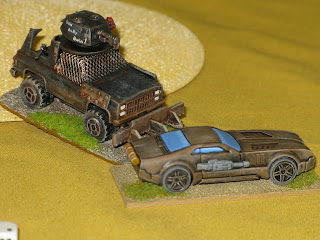 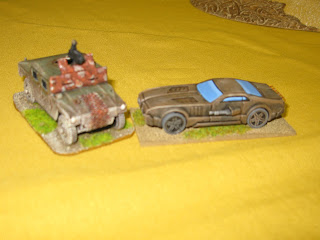 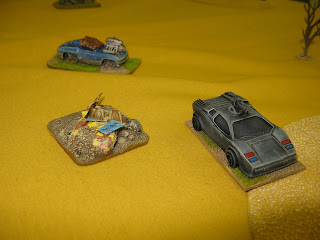 The Axles and Alloys playtest at the club this evening resulted in a bit of a flaming pile up with both sides reduced to battered wrecks by the end of the game. We started off with one car against another then gradually introduced more until we ran out. In the end, Jon was the only survivor although it was a bit of a close run thing for both of us at times.


The rules worked very smoothly with only minor glitches that were more down to us not reading them through properly than any fault of the system. I can recommend the use of turret weapons which are very useful if you want to avoid driving around in circles, together with dropped spikes, which did some unpleasant steering damage to one of Jon's heavies.


I don't advise that you attempt any high speed jumps though, as they can have a bit of an impact on your structural integrity. I'm sure Jon would recommend the use of flamethrowers and ramplates, judging by the results of his efforts in both techniques which were quite impressive.


A couple of additions to the rules would be helpful. It would be handy to have an index to avoid flicking backwards and forwards through the rules and a blank car record sheet for light, medium and heavy vehicles would also be a bonus. These are only little things and we could easily produce them out ourselves, which is what we both did for the record sheets anyway.


Overall, a very good system and one which I'm sure we'll return to with yet more converted Hotwheels in the not too distant future, perhaps as a multiplayer club game?
Posted by Jim Jackaman at 22:55