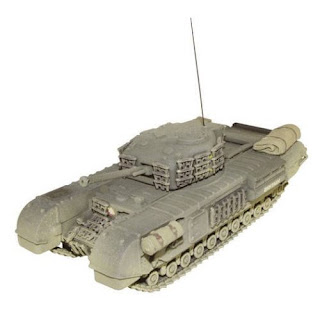 I've just recieved one of these in the post to add some tank support to the 28mm British Infantry platoon for Rate of Fire.

It's a Corgi diecast in 1/50th scale which is close enough to 28mm not to cause me sleepless nights. I'll definately be re-painting and detailing it though as it looks far to bland as it is. It cost about a tenner on Ebay so not too pricey. I may even get another if I can find one cheap enough. Although I can't use it now due to a lack of rules for armour, there's going to be a supplement added later which includes tanks and other AFV's.

The weapons bits from EM4 arrived in the post too. They're not bad but have the arms cast onto the guns so I'll have to do some cutting and sanding before sticking them onto the diecast cars. They're a bit on the big side but will look fine as heavy weapons for Axles and Alloys.
Posted by Jim Jackaman at 06:56