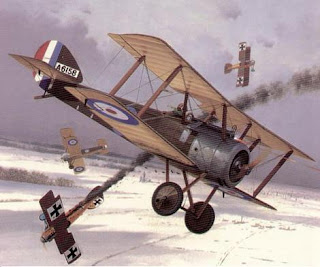 Just back from the WW1 aerial game at the club which was as much fun as ever, despite the Roland DII living up (or should that be down) to my expectations. Actually, compared to some of the unluckier pilots, Leutnant Freiherr Ritter von Popenfahrt didn't do too badly, getting several shots in on various enemy aircraft and surviving to fly another day.

The unwieldy Roland has seen better days though, with three engine hits, two wing hits and a couple of large holes in the fuselage. In the end I was forced to dive out of the dogfight with a shot up engine which, after a couple of turns kicked back into life, leaving me stranded at low altitude. I had no way to get back into the melee above, due to an earlier engine hit power loss that had rendered my flying machine unable to climb, so decided to fly off into the sunset.

This would be a bad idea as it would have been the wrong direction in February 1917, assuming I didn't fancy being a POW.

Still, a good game was had by all, so I'm thinking of adding a few more aircraft to the collection in order to set up another multiplayer mission later in the year. It will be something in 1917 as this gives the greatest scope for scenarios. I have a very nice Eduard Junkers J1 kit that would be great for a ground attack game, together with a few escorting Dr1's, or I could build a few Airfix DH4's for an allied bombing mission.

I've got lots to choose from whatever I decide to do.
Posted by Jim Jackaman at 23:02