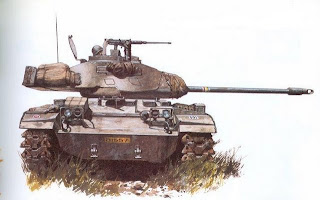 I tried out the grungy wash that I mixed up yesterday on the ARVN armour this evening. It's not quite the right shade I was looking for but will do well enough.

I subsequently found the recipe for the original batch that I used on the CO stands, 50:50 GW Black / Scorched Brown plus a top up of Future. I may well mix up a small batch of this formula and slosh it over the engine grills and hatches of the APC's and tanks just to add a little definition. After that it's onto a light highlight with GW Dheneb Stone and they're three quarters done.

I'm looking foward to finishing the ARVN so I can change the picture at the top of the blog and so I can start the next project. Mark from Raiden hasn't sent me the Ju88's yet so I might have a breathing space in which to paint up the Axles and Alloys cars over the weekend (except for the snail which has been consigned to the unfinished dustbin of doom).

I'm also deciding which of the next big projects to start alongside the stuff for the participation game. Current front runners are the AK47 dictatorship army or the DCLI in 10mm for BKC2 or 28mm for Rate of Fire. I may even tackle the Norwegians despite the lack of suitable opposition at the moment. Who knows?
Posted by Jim Jackaman at 13:29