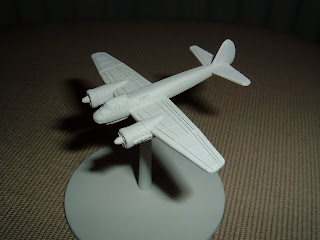 It's now a week after the deadline for completion of the ARVN passed and, despite my best intentions, I haven't had the time to get them finished off. Although I have done some work on the vehicles, the infantry and artillery remain just undercoated in black. I could blitz them this weekend in a late night painting session and it wouldn't be difficult to finish them off at least to a point where just the bases would need to be textured, washed and drybrushed.

However, on the 1st March I'll have to move on as the Raiden bombers will be arriving from Mark the following week and I need to get some practice painting in before then. Mark sent me some pictures of the master for the Ju88A1 and it looks superb. He's going to send me an initial batch in a few days and I really need to get them underway as soon as I can. I have a week or so before they arrive so I still have some time to play with.

With this in mind, I'm going to dig out some pre-based and undercoated Axis aircraft I have for North Africa to practice my painting, masking, lining and shading. I have a Scotia SM81 Pipistrello and four Raiden Bf109F's that I will use to brush up my techniques. I may also tackle a handful of RAF aircraft for North Africa or some USAAF fighters for 1943-44. I haven't tried painting bare metal before and I need to fine tune my decalling, so some P51's, P38's and P47's would be an excellent way to get some more experience under my belt.

Back at the start of the year I listed both the North Africa and NW Europe aircraft on my list of things to do this year, which means I'll be chipping away at the leadpile in the process, without infringing the NYR rule.