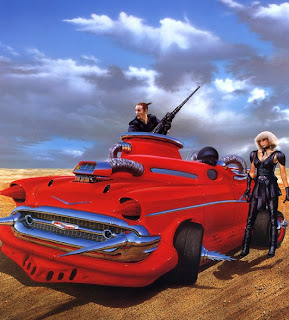 I've started painting up the diecast cars for Axles and Alloys this afternoon, in between all the usual family related stuff I have to contend with. I've gone for the 'quick drybrush then tidy it all up later approach' as haven't got a lot of time to spend if I'm going to get the ARVN armour done this weekend too (unlikely, but it's worth a try).

Anyway, I've gone for two cars in Foundry three stage Base Sand, one in GW Greys of various shades and one in GW browns. They look OK so far and I'm hoping to finish them off to a pre-detailing standard this evening.

The fourth car is one I bashed together yesterday to replace the one I didn't like the look of. It's a very old Maisto Lamborghini something or other, with the spoiler removed and replaced by grills made from a couple of bits of N gauge pallet, together with the last of my Dark Future turrets as a roof mounted machine gun. Sounds a bit dodgy, but actually looks pretty good!

I'll post some photos as soon as I've got them all to a decent level of finish, if possible with bases to match the sort of thing that Jon has done for his stuff.
Posted by Jim Jackaman at 19:41