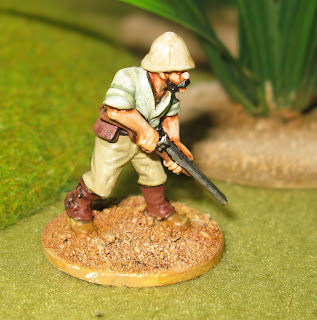 It's about time I ran another game of Saurian Safari at the club, having had to cancel my last game before Christmas due to the usual family related stuff that seems to crop up with inconvenient regularity.

I've run several games over the last two or three years since picking up a copy of the rules on ebay for next to nothing. My subsequent collection of Copplestone figures and plastic dinosaurs has made the whole exercise slightly less inexpensive but it's been worth the outlay for the fun I've had running the games.

We've had an annual hunting competition in July, for the highly prized Compton Pauncefoot III memorial trophy, as well as a number of archaeological expeditions to the Lost World. The last game was a pulp era rescue mission, using the Saurian Safari vehicle rules as an added element to the game.

With this sort of thing in mind, I picked up a resin Ironclad Miniatures steam tank thing at Warfare last year as it looked cool. I haven't built it yet but will be using it in my next game as an alternative to the converted Model T Ford safari truck that I used in the last game. I just have to write up some extra rules for it's use in the scenario and then paint it up and I'll be ready to go. This could involve all sorts of 'interesting' random events and should be a good laugh.

I'm going to set a date for a game and, hopefully, get the usual bunch of loonies signed up for a bit of Victorian dinosaur safari action in the not too distant future.
Posted by Jim Jackaman at 18:13