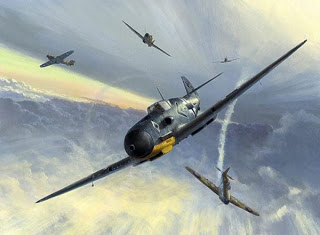 Things are starting to move along with the club Battle of Britian participation game, which is a good thing as time is ticking away if we're going to get everything sorted for Salute this year. The painting is well underway for the Luftwaffe and RAF units, with the exception of the Junkers 88's which Mark was sculpting for the game.

These should be available soon and I'll be starting on them as soon as they arrive. I've got 24 to paint up so it'll take up quite a lot of my time next month although I'm hoping to squeeze in a small project alongside, perhaps the Norwegians or Late War German paras for BKC2. Either that or I could tackle one or two units of 28mm or 15mm figures for Rate of Fire or AK47.

I still have to finish the ARVN which have slipped behind again due to my diversion into Axles and Alloys this last week. I was supposed to finish the ARVN by today (oops!) but have a couple of weekends over half term in which I can finiosh off the armour and paint up the infantry, which shouldn't take very long. If I can finish them before the 22nd I will still have met my deadline for the first project of 2010.

I'm off on holiday to the Cotswolds on Sunday and won't be back until the end of the week, so it's the weekend or bust as far as painting is concerned.
Posted by Jim Jackaman at 02:52