Full Steam Ahead and Damn the Dinosaurs! 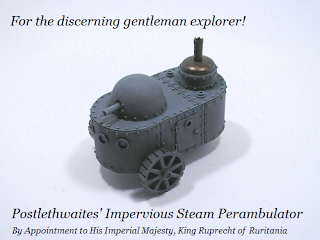 I've booked up a slot for a Saurian Safari game on the 23rd March which should give me plenty of time to work out a scenario and devise some random rules for steam powered exploration machines, like the aforementioned Impervious Steam Perambulator.

I've had a go at a basic scenario outline for the players including some details on the use of steam contraptions, turret weapons, firing from portholes etc, based on my existing expedition set up with added extras.

Now I need to produce some guidelines for the umpire including a malfunction chart and rules for dinosaur reactions. I'll try to get some more done this evening and I'll post it up here when I've finished. I'll also dig out the kit of the steam tank, as I'm not going to get very far if I don't crack on and build the thing in the first place!
Posted by Jim Jackaman at 08:33