Way, way back at the start of 2014 I bought a few packs of Wargames Foundry British Commandos as a Xmas stocking filler, with the intention of using them for Bolt Action. I even found a really nice resin LCA from Grand Manner to go with them. Needless to say, these have been stuck in a small plastic box ever since, although they've been ticking away at the back of my mind.
Anyway, to cut a long and very familiar story short, I was up in the loft at the weekend and found a small plastic bag full of Westwind Berlin or Bust commando figures that I'd completely forgotten about. I painted up a section of these about fifteen years ago and they looked pretty good but I sold them on Ebay to a bloke in France, with the leftover figures stashed away to gather dust. 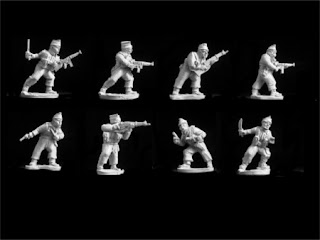 If you line them up against the Wargames Foundry figures they're actually a good match, both in terms of sculpting style and size, although the rifle armed figures don't really work. However, I do have enough figures with SMG's, commando knives and pistols plus a couple of bren team to be able to put together a third commando squad alongside the Foundry figures. 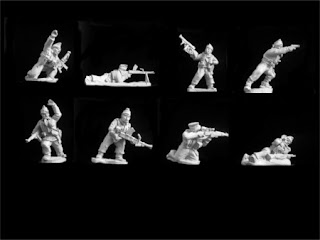 In Bolt Action terms this means that I have enough for a decent small troop rather than just a couple of rifle sections, an HQ and an engineer team, which makes it much more viable as a mini-project. At a push they might even be useable with my 28mm Japanese for 'behind enemy lines' commando raids in the Far East, although this would be fictional rather than historically accurate.

I don't know when or even if  I'll get round to painting them up but at least they're back on the radar. In the meantime, I'm now going to do some test 'speed painting' on the Japanese figures to work out the best approach to take over the summer holidays. The first stage will be to do a soft tone wash and a drybrush with Foundry Base Sand, before blocking out the webbing and equipment.
Posted by Jim Jackaman at 01:39