The Law of the Gun 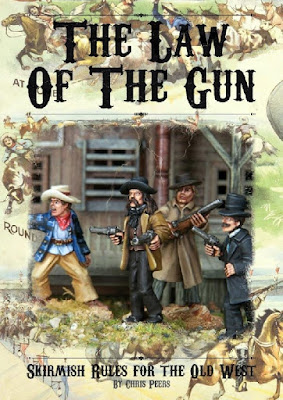 There's a summer sale on at Northstar with some interesting things reduced down to a fiver. I wanted another artillery set for my WSS imaginations project, so for a fiver I now have a battery of four cannon and some more mounted command figures for a nice vignette. I might even be able to use some of the gun crew as sappers too.


I was also tempted by the Chris Peers western gunfight rules The Law of the Gun, which looked interesting and might be ideal as an game to play with my boys. I've played a lot of Legends of the Old West and some Dead Man's Hand games as well but neither are quite simple enough for a nine year old to pick up without quite a bit of stopping and starting..


The rules are designed for one to one shootouts between small gangs of no more than four figures, so at a slightly lower level than other rules that I'm familiar with. This should make them just right for a bit of roleplay style action. I like the way Chris Peers writes his rules and the no nonsense mechanisms he uses, so I like the sound of these rules too.


I have two posses painted up and always planned to do a third one but didn't get round to it. This would be a cowboy outfit to use alongside my lawman and banditos. I also really should invest in some decent terrain now that all those nice mdf buildings are available, assuming you have deep enough pockets!
Posted by Jim Jackaman at 12:08