Back of Beyond Expedition Extras [2]

What do you get if you cross this: 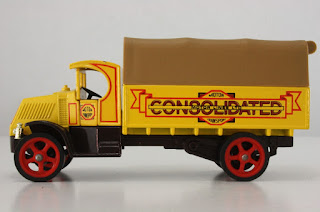 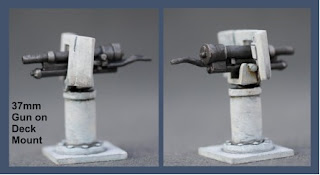 I'm not entirely sure but I'm about to give it a go, using some plastic card and strip to turn the Mack AC lorry into a 37mm Puteaux M1916 equipped (un)armoured gun truck for my Back of Beyond expedition. The lorry is a Days Gone By diecast which I had left over after converting the others into machine gun carriers and improvised armoured vehicles, while the gun is a Pulp Miniatures model from the deck gun pack.

This isn't one of the options in the Dinosaur Hunter army list but, as my expedition is a rufty tufty, tooled up Texan oil exploration team, I'm fairly sure they could have easily 'found' a second hand infantry gun, perhaps from a freindly Chinese Warlord's arsenal or armoured train and fitted it to one of their machine gun armed heavy trucks, just in case? It will certainly add some much needed anti-tank firepower in place of a 'proper' armoured car like my Garford Putilov.

The Puteaux 37mm has a range of 40'' against infantry targets and 24'' against vehicles, so it will be limited in range but effective as stand off support against soft targets. I'm working on a points cost of fifty for the vehicle and an extra forty for the gun, which seems a reasonable calculation given the restricted range? I'm going to get this assembled this evening so will post some pictures of the end result once it's glued together and undercoated.
Posted by Jim Jackaman at 01:19