Back of Beyond Expedition Extras [7] 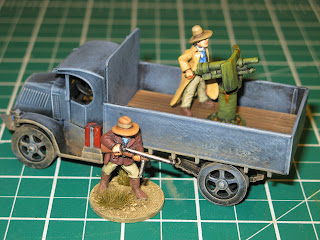 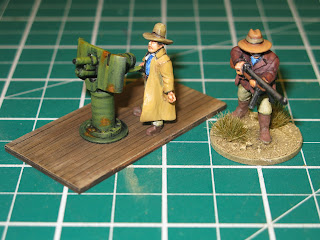 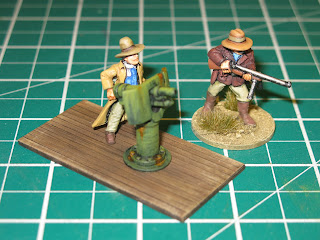 After the game the other day I was pondering the lack of anti-armour capability in the 'Dinosaur Hunter' expedition army list. The answer to this tactical shortfall would be to allow the force to have some limited anti-tank weaponry of some sort, without going too far over the top. I decided to have a go at an anti-tank rifle conversion of a Copplestone big game hunter, to see if I could fill this gap.
This involved a simple headswap and the addition of a bipod from a Lewis gunner figure, so fairly straightforward. The anti-tank rifle is supposed to look a bit like a Mauser T-Gewehr although it's a bit on the short side. In the club house rules this figure will take the place of one of the snipers and will cost exactly the same in points terms.
The other thing I thought of was to up-gun one of my unarmoured machine gun carriers with a 'drop-in' 37mm anti-tank gun, although this is a bit on the heavy side compared to the AT rifle. I'll have a go at persuading my opponents that this is a reasonable addition to the expedition's firepower, on the basis that a friendly Chinese warlord passed it on as army surplus for an exorbitant price tag!
Posted by Jim Jackaman at 04:09