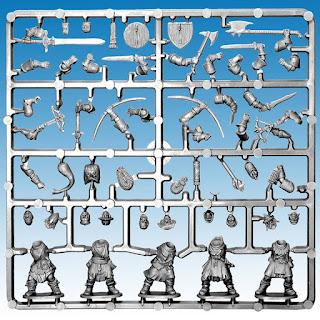 I gave into temptation (again!) and ordered a copy of Frostgrave last week, using the last of my birthday Amazon tokens left over from January. The rules only cost me £1.65 as a result, so I blew my pocket money on a box of the plastic soldiers that have been released to go with the rules. I've already had a rummage in the loft and found several plastic sprues of GW Bretonnian Archers and a handful of metal Bretonnian brigands, which I had bought years ago for some long forgotten HYW skirmish project. These can be added to the plastic figures and adapted using some of the extra bits on the sprues, to create some interesting additions to the opposing sides. 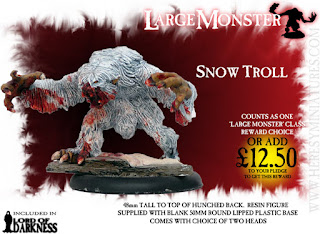 I haven't found a wizard and apprentice yet, not really wanting to use the 'official' figure sets, but I do have some rather nice monsters and beasties. These include a fantastic multipart Heresy Miniatures snow troll, which I originally acquired for a pulp scenario and which will look superb once assembled, based and painted. I'm thinking of taking the Frostgrave stuff off to France to do this stage, alongside painting up my 28mm Japanese Platoon for Chain of Command. I'm impressed by the rules already, having had a decent read through yesterday afternoon, so I'm looking forward to tackling this unexpected addition to the project 'to do' list over the Summer.
Posted by Jim Jackaman at 05:01