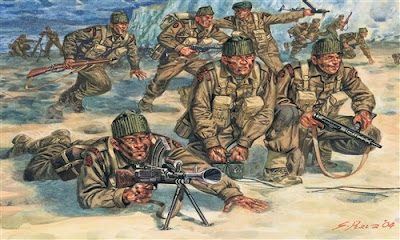 I set about organising my Foundry and Westwind commandos for Bolt Action and Chain of Command today, having forgotten to pack any superglue so being unable to start basing them up. I'll get some tomorrow but, in the meantime, I have sorted out a flexible orbat to cover both of the rules.


The Bolt Action 'platoon' consists of an HQ of an officer and NCO, together with an attached naval forward observer team. The two commando sub-sections consist of an NCO with SMG, seven riflemen and a bren team. The support elements include a 2" mortar and a sniper team, so a bit limited but better than nothing. In cost terms the total force adds up to 563 points or 623 if you include an LCA landing craft.


The Chain of Command 'platoon' is slightly different and a bit more interesting, with some additional support elements to jazz things up a bit. The HQ section consists of a senior leader, an NCO senior leader, the 2" mortar and an extra bren team instead of a PIAT team. This isn't really historically accurate but neither is Bolt Action, so there you go! I'd like to have a Boyes AT rifle but I haven't got one and I doubt they'd have one either.


The two commando sub-sections are the same but the support elements now feature as options in the support lists rather than as pre-determined add-ons. These consist of the sniper team, the naval forward observer and a three man demolition engineer team. There will also be off table naval fire support, equivalent to a 3" mortar battery, and the on-table LCA which can act as direct fire support.


In real terms both of these commando forces represent small 'hit and run' raiding parties rather than full blown assault units. They definitely wouldn't last very long without the benefit of stealth and the use of darkness to sneak up on the enemy, so that's exactly what I have in mind. I plan to use them for skirmish level scenario based games, so more Heroes of Telemark than Raids on St Nazaire!