Back of Beyond Supplement Sale! 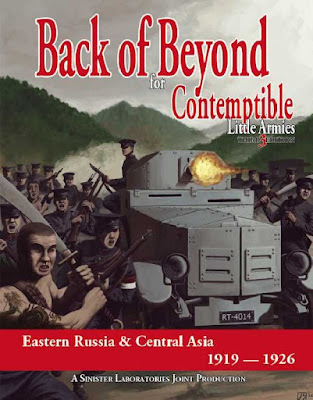 If you haven't heard of the Back of Beyond or have been thinking about starting your own army but just haven't got around to it, you may be interested to know that the revised supplement published by Sinister Laboratories is currently on sale at Brigade Games:


The army lists and campaign system are perfectly good for any set of skirmish level rules and would work very well with Bolt Action, for example, so if Contemptible Little Armies isn't your cup of tea, no problem. The Osprey interwar rules, A World Aflame, would be a good place to start.

They would also work with 15mm figures rather than 28mm, which would keep the cost of starting a couple of armies down to a minimum. Peter Pig, Miniature Figurines and QRF all do ranges that would provide most of what you need, especially if you mixed and matched a bit.

So, if you fancy some central Asian platoon level skirmising in the Back of Beyond, with armoured trains, interwar tanks, Mongolian irregular cavalry, Chinese Warlord 'dare to die' infantry, armoured car flying columns and Bolshevik shock troops, now's your chance!
Posted by Jim Jackaman at 02:15