Back of Beyond Expedition Extras [5] 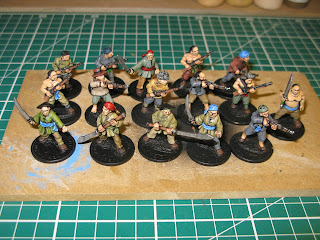 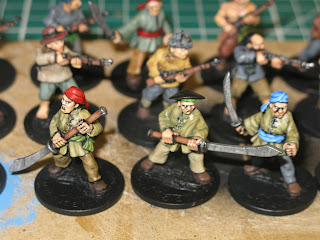 I finished painting the unit of Chinese labourers for the Back of Beyond expedition over the weekend, with a few little details to pick out and the basing to be finished off this evening. I'm a bit rusty when it comes to 28mm painting, so they're a bit rough around the edges and fairly workmanlike, but they'll have to do. I'm not sure painting over a black undercoat is such a good idea for a start. I also ran out of Army Painter spray matt varnish so had to use a combination of Humbrol satin varnish and brushed on matt varnish from a bottle, so they're still a little too shiny. 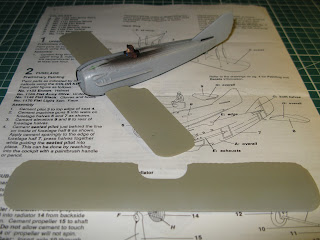 I also made a start on the SPAD XIII kit and painted up the pilot figure to fit into the cockpit. I don't think I'll get the model finished for the game but I should be able to complete it by the end of the week, ready for use in the next Back of Beyond encounter. It took a while just to sand off the roundels on the top wing and to fill in the ejector holes on the lower one, so it has been less straightforward than I expected. The rest of the kit should be much quicker to put together, with just the painting left to complicate things.
Posted by Jim Jackaman at 08:30