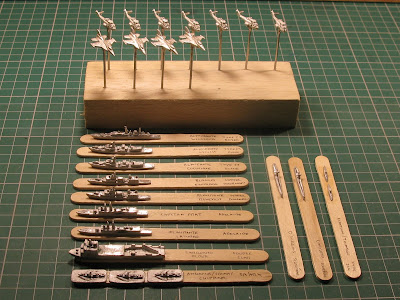 Here's the 1/3000th scale Chilean fleet ready for painting, as half of my second modern naval project this year. I could add a third Type 23 but other than that it's pretty much all there. The aircraft include seven AS532 Cougar helicopters and four F-16's fighters, the former for ASW and to equip the LPD, with the latter for anti-shipping strikes and top cover. The Chileans can fit their Cougars with AM-39 Exocets as well, so they can also be tasked with stand off, anti-shipping missions, making them doubly useful. I'm planning to get started on these at the weekend.