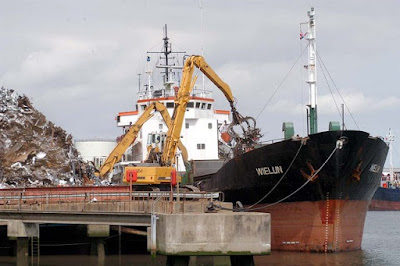 From our correspondent in Port Tchumba

The docks in Port Tchumba have been very busy this week with the arrival of the Chinese cargo ship, MV Weilun, loaded with agricultural machinery and spare parts for the state farm at Mbogo. The dock workers have unloaded all of the cargo in record time and it has been temporarily stored in a dockside warehouse, ready for transportation to Mbogo. The Mbote Defence Force (MDF) has been seconded to assist with the movement of the agricultural machinery using its heavy tow equipment.

The MV Weilun is now being reloaded with a cargo of scrap metal, which has been stockpiled at the docks for  transhipment as part of the recent reciprocal trade deal signed by Minister of Finance, Dr Phat Whalet, and his Chinese counterpart, His Excellency Mr Bao Tsin Shek, earlier this month. A spokesman for the state dock authority confirmed that a record turnaround has been ordered by the government in order to avoid any delays.